On a Thursday night, I was in a gastronomic fix. Tucked into the alleys of the hipster district of Kreuzberg in Berlin otherwise known for its annual May Day riots, is a massive hall called Markthalle Neun, where the movers and shakers of Berlin’s burgeoning pop-up restaurant and supper club scene come together. There I stumbled into the underworld of Berlin cuisine. Orbs of fried octopus, Koshary (Egyptian street food), Berlin Meat Balls, Peruvian Ceviche (raw fish with lime juice), Allgäuer Kässpatzen (German-style macaroni and cheese) and Korean Bao Buns vied for the attention. Local beers and ales were naturally the hotsellers. And there in that hubbub of music, people and food couched inside a 19th century market hall, the windows of which were once painted black and business brought to a standstill during World War II, I found myself  caught in a dilemma that no food lover should complain about.

In Berlin, nightlife begins only around midnight and these food markets cater to nocturnal revellers. As I left that district which is home to immigrants, progressive youth and expats such as my husband’s Canadian friend of Chinese origin – she had taken us into its beatnik heart – the feeling that I was in a freewheeling city clung to me. Then there are its beer bikes. One extremely sultry afternoon past us chugged this rolling bar, pedal-powered by groups of beer chuggers. Their reward: 10 litres of beer per hour.

You see by now that almost everything goes in Berlin. The bohemian thought process is reflected almost everywhere. That would include its famous 520-acre public park, Tiergarten that once used to be the hunting quarters of kings till one worthy Frederick II decided to transform it into a lustgarten (pleasure garden) for the public. What would Frederick have made of the nudists who sun themselves now in a certain quarter of the park, I wonder.

My initial reaction to Berlin was dismay. The city that had been headquarter to the Nazis, staged a revolution, been bombed to oblivion, sundered into two and been reunited again — I expected it to be chock-full of history. My disillusionment was stoked by the sight of the accoutrement of urban shops, hotels, restaurants and Bikini Berlin, a ‘concept mall’ of West Berlin, on Kurfürstendamm, one of the most famous boulevards in Berlin and where my hotel was strategically located. The only redeeming feature there strangely enough was the ruined spire of Kaiser-Wilhelm-Gedächtniskirche, a 19th-century church badly destroyed during the air bombing raids of 1943.

But I started changing my mind as I found my way to the historic Mitte, walking for miles and miles along the leafy trails of Tiergarten. There on the way I chanced upon disconcerting memorials such as the one to Aktion 4. It was a programme of forced euthanasia in Nazi Germany carried out on psychiatric hospital patients declared unfit to live. The methods were later to be replicated at extermination camps and mobile death vans.

Memorials make up Berlin’s landscape. There are more than 30 that mark its warped history but the most poignant of them is the plaque for Peter Fechter, an 18-year-old bricklayer, who became a symbol of the Cold War. Fechter was shot by GDR border guards in 1962 as with a co-worker he attempted to climb over the Wall to Kreuzberg in West Berlin. The co-worker got away but Fechter bled to death while guards and witnesses watched him die. Then there’s the Rosenstrasse memorial which I looked high and low for. It recalls the uprising of a group of non-Jewish women when their husbands, 2,000 Jewish citizens of Berlin, were detained in February 1943 at Rosenstrasse as part of deportations by the SS and the Gestapo. The result of the uprising was that in March 1943 the prisoners were released.

The commemoration that needs no hunting down is Checkpoint Charlie. The crossing between erstwhile East and West Berlin nowadays resembles the first guard house erected in 1961 with sandbags. A former colleague of mine told me that she had found soldiers patrolling the checkpoint when she had visited the city during the year that the Wall came down. How different times can be… I came upon actors dressed shabbily as allied military policemen, charging enthusiastic tourists heftily for token photographs.

In between queueing up for a visit to the Reichstag for hours and browsing free museums such as the Willy Brandt Haus on Unter den Linden named charmingly for the lime trees that line it, I fell for a few quarters in the city. The grand Parisier Platz with the neo-classical gate, Brandenburger Tor, the Reichstag just around the corner, Museum Sinsel, a hub of five museums, dominated by the Berliner Dom that sits on the River Spree. My other designated happy corner was Gendarmenmarkt, named for the Gens d’Armes, an elite Prussian mounted regiment that was quartered there in the 18th century.

On a grey windy day in the middle of that hot summer, I climbed 254 steps up the Französischer Dom on Gendarmenmarkt and was rewarded by a beautiful view of the city. From above it, I could hear the rantings of a pony-tailed man who had been stomping up and down the square with a strolley for some time, screaming himself hoarse about some kind of conspiracy. Just around the corner from the square is a chocolate boutique, Fassbender und Rausch Chocolatiers, the first in Europe to spice everything with cocoa. Be it fish, meat, salad or soup, expect sweet notes of chocolate in it. 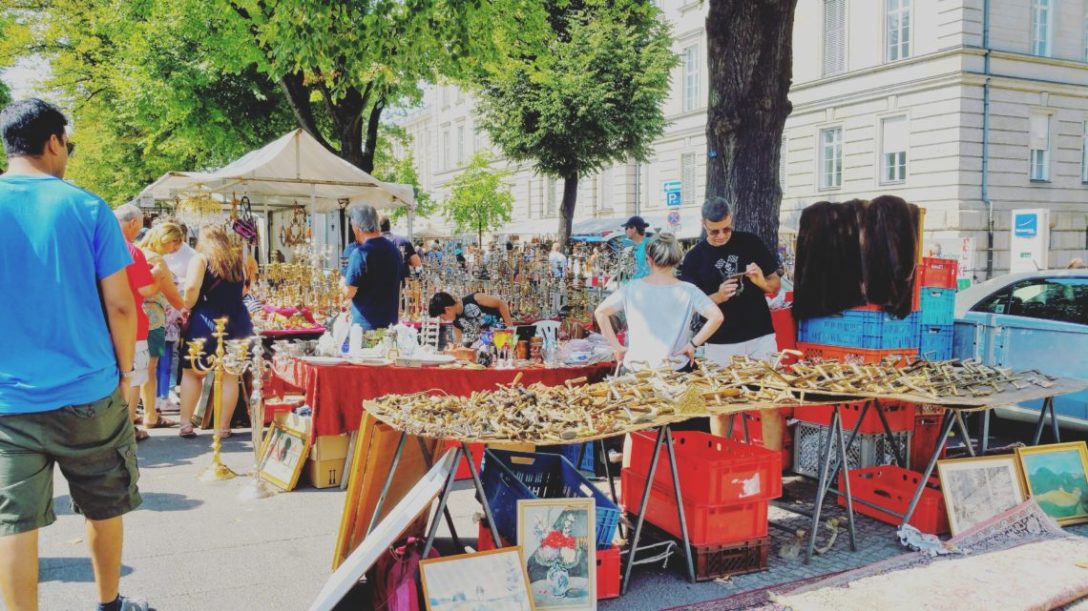 Now, I was warned about the temptation that awaits the unwary at Berlin’s famous flea markets. On a steamy Sunday, when outdoors it seemed to be the very personification of a sauna chamber, my husband and I stepped into Straße des 17 Juni Flea Market to indulge our antiquing souls. In a market that has been tagged Berlin’s oldest flea market since 1973, along with the hordes we braved sultriness to rummage through vintage metal tin signs, antiques, paintings, cutlery, crystal and vinyl to our heart’s content — the thought running through my mind that no day in Berlin can be orthodox.