A one-of-a-kind road trip was on the charts that April in 2014. The kinds that throw up views like the one you see above, of the Red Cuillin, streaky cones of lava deposits thrown up by volcanic eruptions roughly 60 millions ago. Easter holidays were around the corner holding the promise of this remote and ancient landscape.

I had just returned home that spring, chuffed by a girly vacation at the time, made up of giggles, gelatos, ‘mamma mias‘ and wine by the sea in Sardinia, to a pouty husband and a trip to the upper reaches of Scotland, the day after. Anticipation is a sweet thing.

In the wee hours of the morning, accompanied by a couple of girl friends, Adi and I started for the Inner Hebridean island of Skye in our rented car. Located off the mainland of Scotland, Skye is shaped like the claws of a lobster. Or an isle with wings. You choose what takes your fancy. 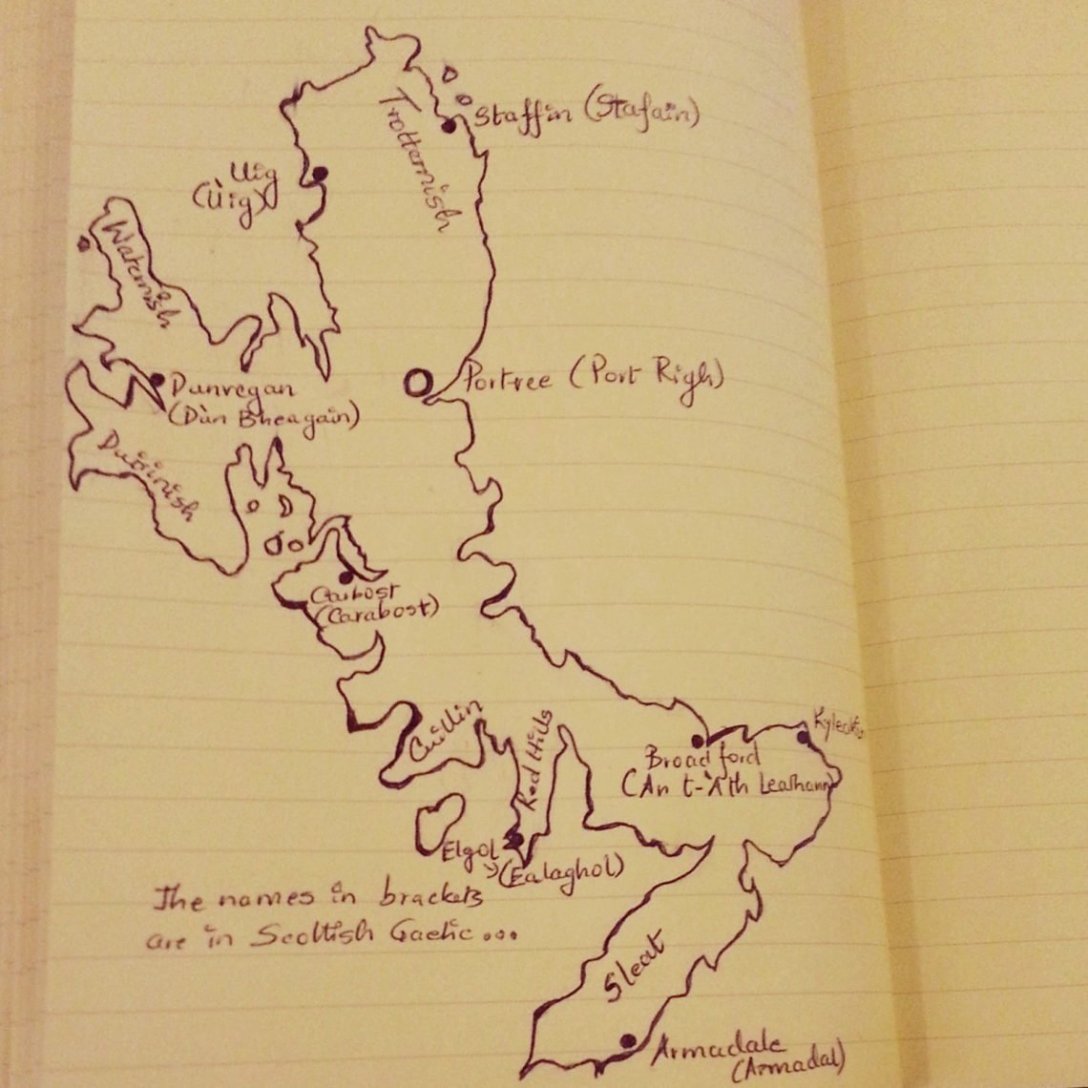 The distance from Northampton to the cottage that we had rented on the isle measured 570-odd miles. A matter of 11 hours if you travel at a stretch. But that can never be because there are the practical necessities of being human. Halting for loo, coffee and food breaks. So there we were, three exuberant girls and Adi. Incessant jabber and a spot of backseat driving too. You could almost hear the gnashing of my husband’s teeth (good thinking to pack in the tube of Sensodyne).

At Glasgow six hours later, we were delayed by the powers that held sway over us. A malignant anti-lock brake system made it necessary for us to stop at the Glasgow branch of the car rental agency. It was the last big stop because when you make a foray into the Hebridean islands you realise fast that you are alienated from everything except nature.

The veil of tiredness that had smothered the drive was lifted visibly once we entered the Highlands. We were back in that ancient land peppered by crumbling castles; roadside pipers bagpiping plaintive tunes atop hills that roll off into the glens; granny pines framing the roads and snow-capped mountains looming ahead. Such dreams are woven on the roads that take you through the Scottish Highlands.

Then there’s the possibility of encountering kelpies – those shape-shifting water spirits who inhabit the impossibly blue waters of the lochs – and the thrilling prospect of Nessie trundling across your path (yes, yes never give up on that old girl). Or being transported into another world peopled by bonnie princes and fierce clansmen. There is such poetry in the landscape. You see almost immediately why Sir Walter Scott wondered on paper, ‘Where is the coward that would not dare to fight for such a land as Scotland?’

Past the bonnie banks of Loch Lomond, hamlets of the likes of Ardlui, the grand Ben Nevis, Fort William and we were finally on the Road to the Isles, the A830, that took us into Dornie to Eilean Donan. The sun had started the process of retiring for the day, in the backdrop of the castle, and with a touch of the alchemist turned the loch into a sheet of rippling gold.

Our brain fluids had meanwhile dribbled out, collecting into little pools at the bottom of our feet, but there it lay in front of us, the Skye Bridge, spanning over Loch Alsh into the Isle of Skye. Something had to be said for travelling in the year 2014 to Skye. A decade ago we would have had to pay a toll fare. There used to be a saying then, according to old-timers who did pay up the fare, per crossing: ‘Skye Bridge – the only place in the world where you get mugged And get a receipt.’

Forty minutes later after the beautiful crossing, driving up and down winding roads, we drew up outside our cottage on the Waternish peninsula to the spellbinding panorama of salmon pink skies tinged with lavender. The relentlessness of the past 14 hours was washed away by that view. Soon my head fell upon the soft pillow and as I slipped into blissful deep slumber to the gurgling sound of a stream gushing by, the sounds magnified by the silence of our surroundings, there was a momentary thrill that we had made it. That we were finally there in the heart of the wilderness.