I have been neck deep in eating, hence the absence. Hedonism in the new year. Indo Chinese and biryanis and street food and what not. All of that would be fodder for another post. I am in Calcutta at my childhood home which means that I am persevering to achieve Zen. A tall order given the frequent squabbling with my mother who remains the most headstrong woman I have ever known. But because I am home alone — something I ached for as a child when my parents refused to leave me to my devices as it would involve my racking up the phone bill to palpitating figures — I thought about reconnecting with my beloved bloggers. After all, I have left my passion for waffling on the phone behind. The passage of time. If this were a 13-year-old me, I would have shrivelled a person who uttered such ludicrous thoughts with deep-dyed contempt and scowls.

Back to our rambles in Rome because I have a truckload of photos to unload upon hapless you, the day we drove into the city from the airport we met a cab driver who lives in a small village near Rome. This large and drawling Italian, born in Rome with an invigorating love for the city, rattled out figures. For example, the dimensions of the Circus Maximus, the former stadium of ancient Rome that now looks like a serene and long vat of green and which 2,700 years ago could hold a 40,000-strong crowd to gawp at chariot races. Our mobile cache of facts was amusing and charming. It was a long conversation about the state of the world, his teenage daughter who has grown out of clinging to her dad for everything, her quest for learning Arabic, his experiences in Afghanistan when he served in the army, their move to the suburbs of Rome, his nonna who makes the best bruschetta for early evening snacks,… but the tip that we picked up was — climb the Altare della Patria that stands at the cobbled crossroads of the Piazza Venezia.

For if you take the combination of stairs and elevator to the top of the boxy monument in white marble built for Victor Emmanuel II (the first king of a unified Italy), you get a breathtaking view of the city. We stood on top of the monument for a long time beneath stellar blue skies and a caressing winter sun, watching people photograph sizeable (could be the pizza and pasta diet) preening Italian gulls with the Colosseum as a dramatic backdrop, photographed them ourselves, and then later retraced our steps to the Roman Forum where I remember jostling with crowds in the summer of 2016.

The road to the largest amphitheatre ever built in this world of ours is in Rome, as you well know. Yes, the Colosseum, and that thoroughfare is flanked by historic columns and arches, basilicas and ruins of former government buildings that must have held sway over ancient Rome. We walked below the many stone pines with their umbrella tops, past tall poplars standing like spare soldiers, sauntered past temples to various goddesses, peered at worn doorways above which murals faded away as if they could not be bothered to defy the ravages of time. 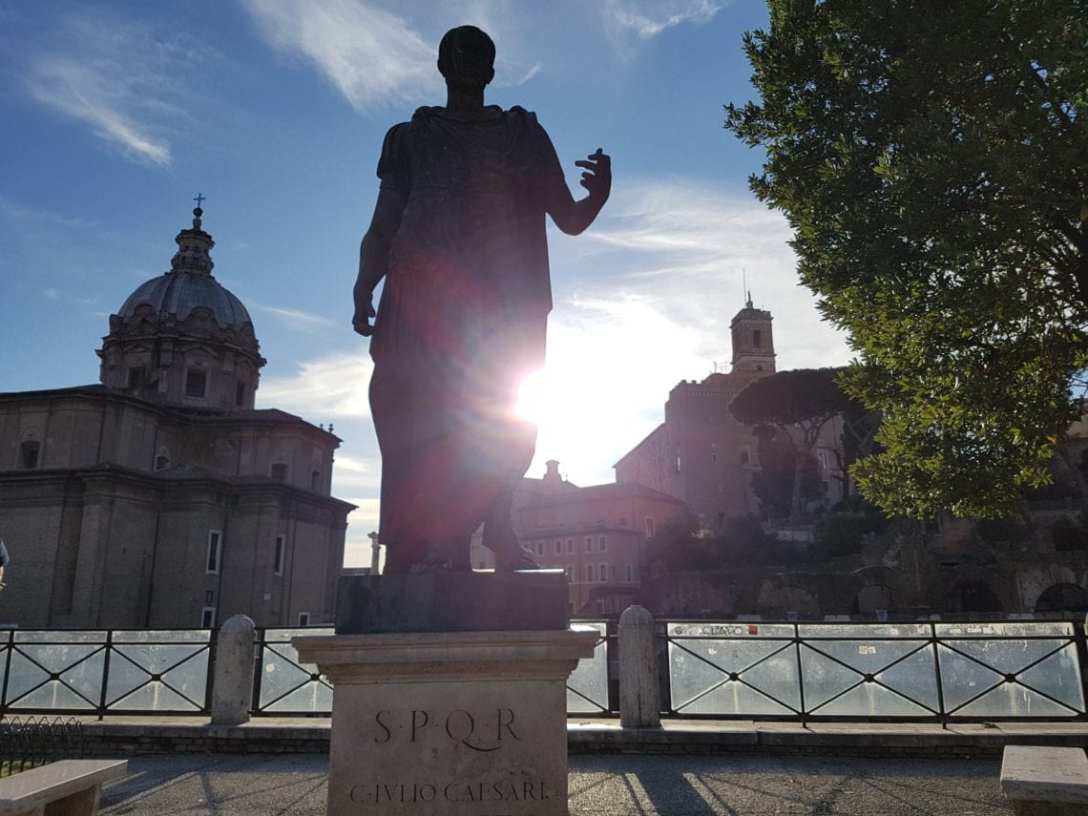 68 thoughts on “Ambling Around Rome”